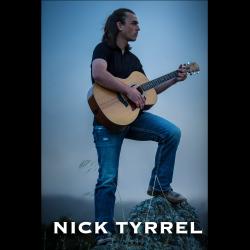 Nick Tyrell is a breath of fresh air to the Country Music scene. He is a special performer with a recognizable voice. Nick at 23 years old is a writer, singer and performer. With his recognizable voice, and special personality, Nick has generated a loyal fan following in a very short time. Nick performed 300 shows last year, and has a Top 100 song (Breath the air tonight) on the Radio. With this airplay, Nick has received attention from Top producers; and recently he decided to work with Clay Mills and Mike Krompass (Smash mouth) in Nashville. Nick also tells the story of posting his song; “Thin Blue Line” to his Facebook page last year, the song completely went viral. The song struck a cord with the personal struggles about having a girl friend who left him. He wrote the song while sitting on a park bench, and how a local police officer asked him what he was doing sitting on the bench alone late at night. Nick told her that he had just broken up with a girl and that he was writing a song about her. The song became an instant hit with over 350,000 plays/views. The Police officer befriended Nick , and the Police associations across California decided to use the song in presentations at their events. The song is currently available on iTunes and will be on his soon to be released E.P. Nick continues to perform and write. Nick is developing a fan base quickly. Catch this rising star soon, as he takes off!