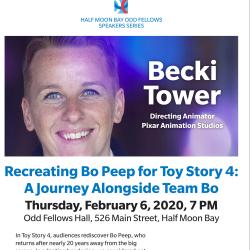 In Toy Story 4, audiences rediscover Bo Peep, who returns after nearly 20 years away from the big screen. In adapting her design, we considered not only the cultural context of reviving one of our industry’s first female characters, informing our story and design, but also the technology now available.

This talk describes Bo Peep’s journey through production: from initial research into decades-old reference and visualization, to the modern results and strides we’ve taken across both creative and technical specialties.

Becki Tower joined Pixar Animation Studios in June 2008, and has since worked as an animator on several Pixar projects.

She currently resides in Half Moon Bay, CA.

This is part of our ongoing monthly series of speakers covering topics from science, history, politics, citizenship, and more. No charge for admission. We appreciate your generous donation in support of the Scholarship Fund and other community programs of the Half Moon Bay Odd Fellows.

Where:
Odd Fellows Hall
526 Main St.
Half Moon Bay, CA
When:
7:00 PM
https://hmb-odd.org/calendar/1784
Add Your Event
Submitted events are moderated and subject to editing before being published. Most events are approved within one business day. 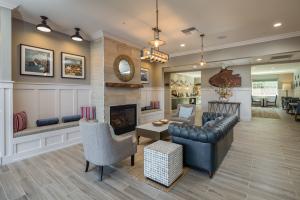