Skip to main content
Please note: This is an older article that was published over 4 years ago. It may contain outdated information, so please double-check any dates, hours, or other information before confirming your plans. Thank you!

Edge-of-the-world views, gardens of coastal flowers, and aquamarine waters teeming with sea life exemplify the immense beauty found at Devil’s Slide Trail. The cliffside promenade is one of California’s most glorious pathways and certainly its most unique. The coastal trail was once a busy highway and, as its diabolical name implies, it wasn’t always so beloved.

For nearly a century, the treacherous thoroughfare along the sheer cliffs of San Pedro Mountain confounded motorists, railroads, and engineers. Frequent landslides would batter the road forcing it closed for up to months at a time. In 2013, two state-of-the-art tunnels were built to bypass Devil’s Slide and, soon after, the infamous stretch of road was converted into a spectacular public trail. Today, families, nature lovers, cyclists, and equestrians can explore dazzling coastal cliffs along the paved 1.3 mile trail and experience what car-bound motorists never could. In just two years, Devil’s Slide trail has become the most popular destination in the San Mateo County Parks system drawing visitors with its grand-scale splendor. 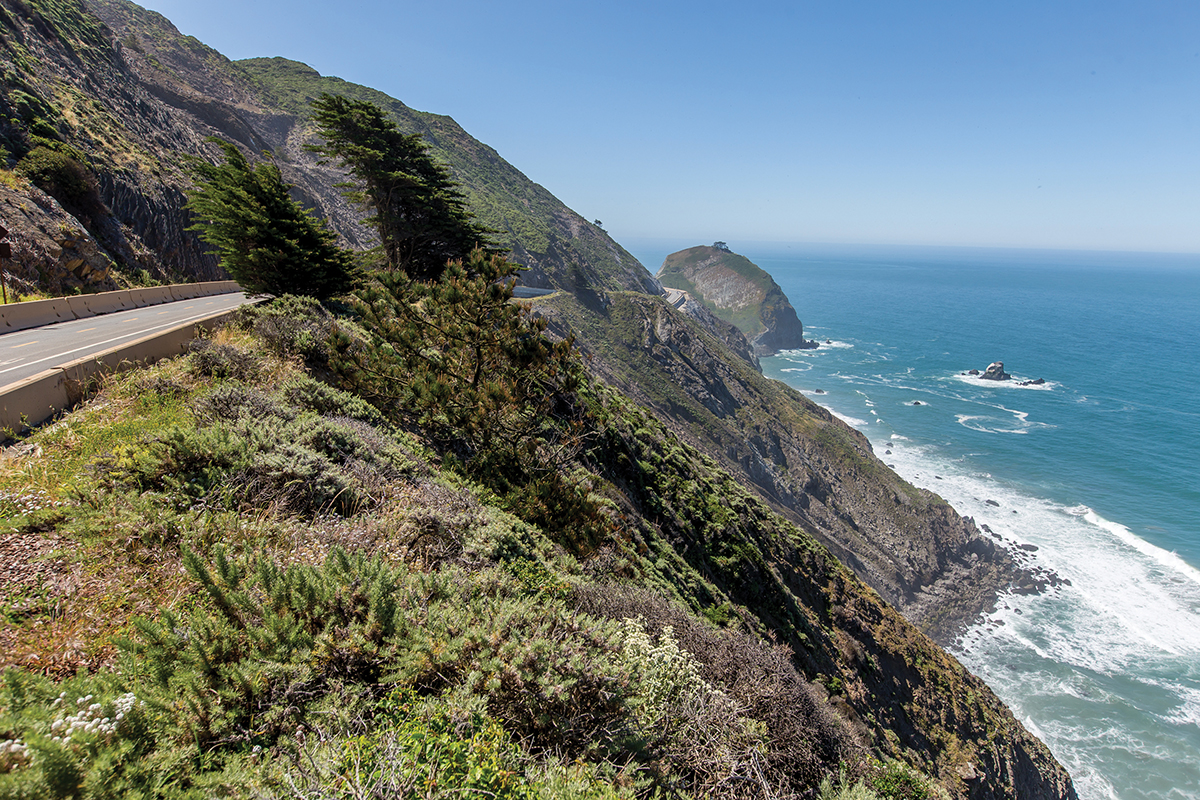 Before it played host to Highway One, Devil’s Slide was the site of an ill-fated railway. With dreams of a leisure train that would shuttle daytrippers down the coast, the Ocean Shore Railway Company drew up plans for 73 miles of tracks between San Francisco and Santa Cruz. Unfortunately, construction began in fall of 1905, less than a year before the Great 1906 San Francisco Earthquake sent tracks along Devil’s Slide plunging into the ocean. The railway eventually opened in 1908 but its northern segment never made it past Half Moon Bay and the beleaguered railroad ultimately called it quits in 1920. Today, the tracks are long gone but visitors to Devil’s Slide trail can spot the railroad bed that cuts through the rough, hilly terrain along San Pedro Point.

While frustrations ran high for investors of the Ocean Shore Railway, it paled to that of future commuters. State Route 1—later renamed Highway One—first passed through Devil’s Slide in 1937 and, just three years later, was buried under fallen rocks. It was an omen of things to come. At least once a decade afterward, landslides and erosion would plague the road and vex local residents. In 1995, a landslide closed the road for six months causing coastside residents to quip that they lived in the world’s longest cul-de-sac. Even on good days, traffic along the accident-prone route would slow to a crawl as motorists carefully navigated hair-raising turns that teetered precipitously over sheer cliffs. CalTrans attempted every possible engineering feat to stabilize the hillside but nature always prevailed.

Concerned with plans to construct a six-lane bypass over nearby Montara Mountain, community members countered by proposing a tunnel through San Pedro Mountain. During the summer of 1996, local car bumpers sported yellow “Think Tunnel” stickers and the measure went on to win in—what else?—a landslide. Construction began in 2005 and two tunnels—one northbound, the other southbound—were completed in the spring of 2013. Stretching 4,149 feet in length, the northbound underpass is the second longest tunnel in California, falling shy of Wawona Tunnel in Yosemite.

What is the source of the instability— and ensuring headaches—at Devil’s Slide? Sedimentary rock. The actual slide area is comprised of what was once the ocean floor, with visible layers of mud and sand, uplifted over millennia by shifting tectonic plates. Due to its mudstone content, sedimentary rock is extremely weak and prone to crumble. It’s this fragile composite that earned Devil’s Slide its notorious moniker. 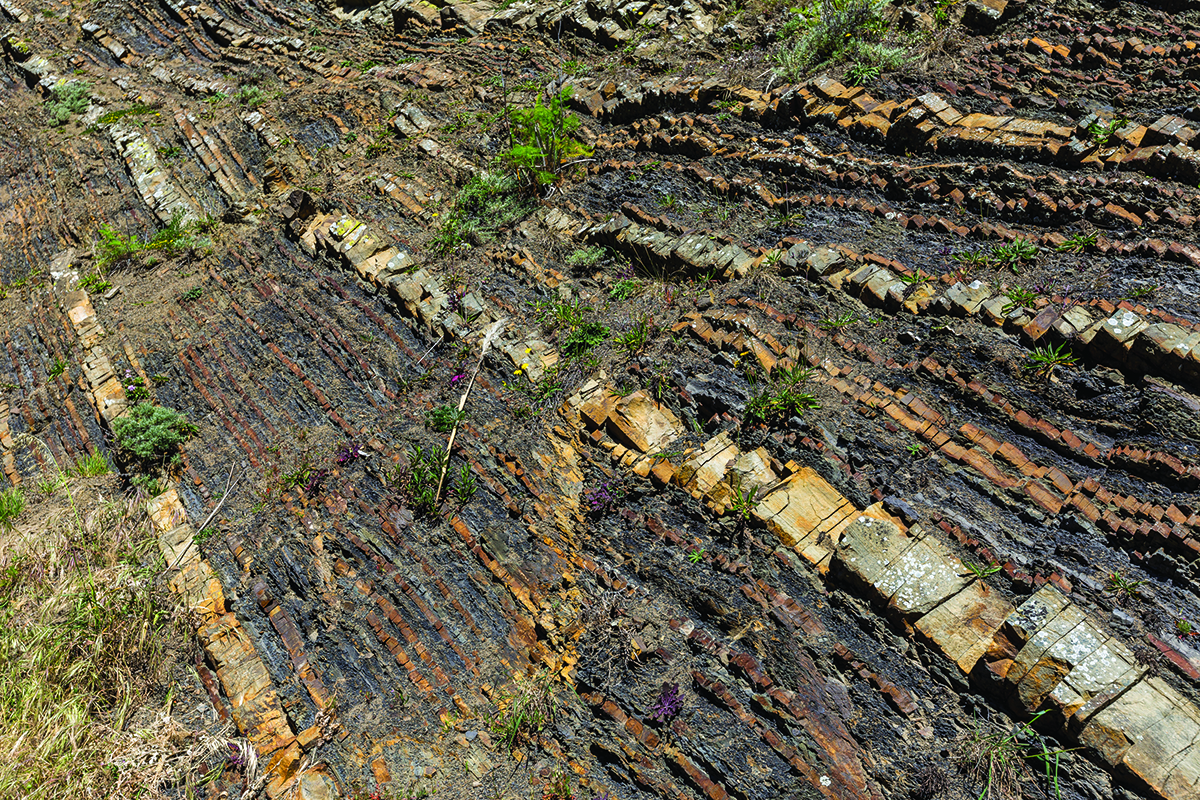 Unlike visitors who view Devil’s Slide Trail as a peaceful respite, geologists consider it a dynamic site of violent upheaval. The trail traverses two distinct, towering rock formations. Visitors can observe how the striated sedimentary rock at the north end contrasts with the solid granitic rock to the south. Identical to rock found at Lake Tahoe and Yosemite Valley, this granite was ripped from the Sierras and thrust toward the coast by forces deep within the earth. Devil’s Slide Trail lends a rare opportunity to explore sheer coastal cliffs in a safe environment and experience the earth’s continuously evolving geology.

Thanks to lush native flora, strolling between these spectacular outcrops is like walking through a hanging garden. Granite slopes are adorned with a variety of plant life such as fragrant California sagebrush, the scarlet blooms of Indian Paintbrush, and vibrant Seaside Daisies.

Devil’s Slide Trail provides an incredible vantage point for spotting marine birds and mammals. Three observation platforms outfitted with benches and viewfinders allow visitors to catch sight of ocean life such as bottlenose dolphins frolicking just offshore. Gray whales are often seen hugging the coast in January, on their southward migration toward birthing grounds in Baja, and in spring as they return north alongside their calves. Bring binoculars to spot humpback whales which swim further from shore and are primarily visible from April through October. The area’s frigid waters also proliferate with pinnipeds such as California sea lions and harbor seals that haul out on nearby San Pedro Rock. 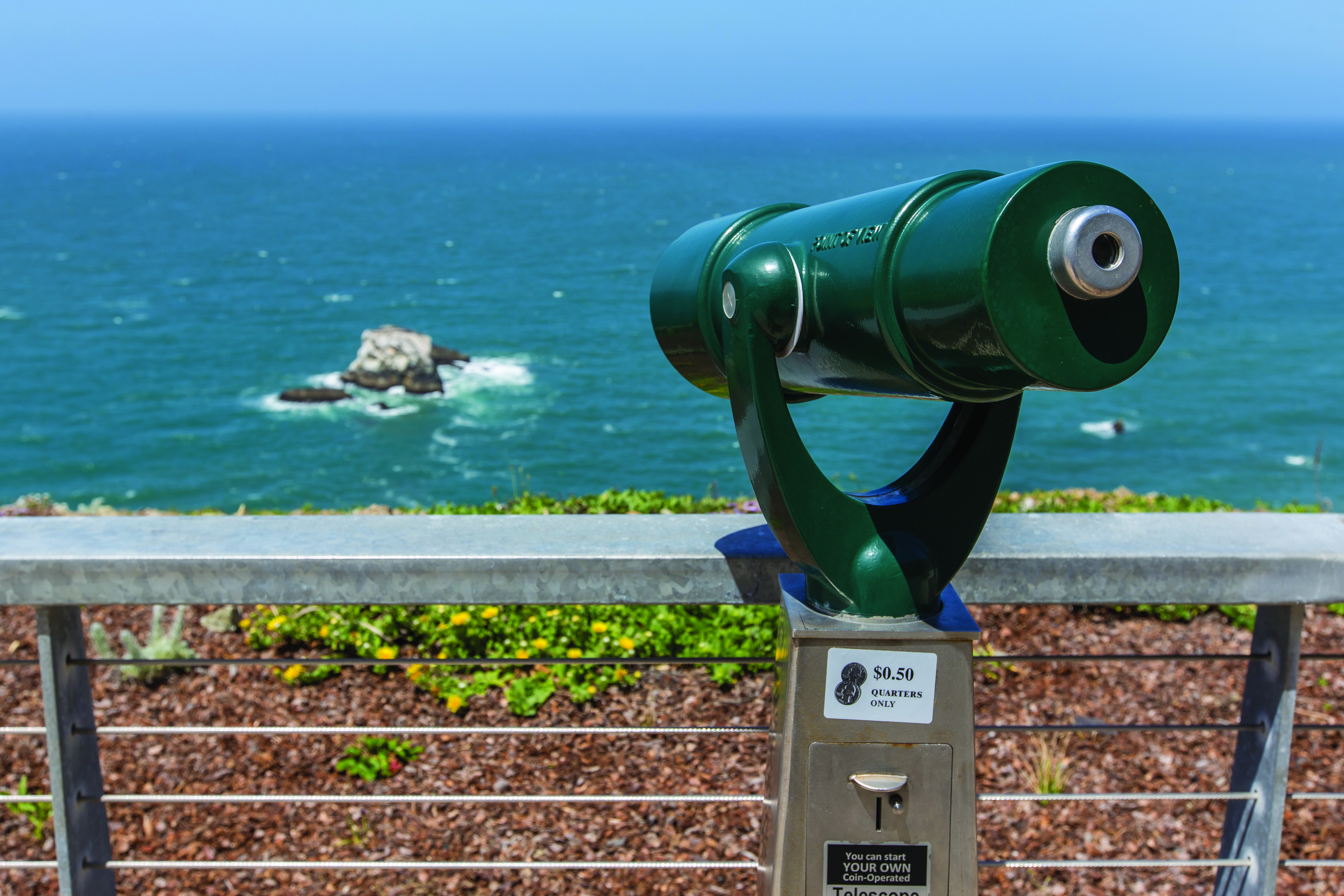 CURE FOR THE COMMON MURRE

In addition to seabirds like pelicans and cormorants, visitors might also spot sleek peregrine falcons darting in and out the crevices that pock granite cliffs. And don’t be surprised if someone excitedly points out a penguin. With a black bowling pin-shaped body and white oval belly, the common murre is easily mistaken for its Antarctic doppelgänger. True seabirds that live their entire lives at sea, murres maintain a nesting colony just offshore at Devil’s Slide Rock. In the 1980s, the murre colony here was completely wiped out by gill nets and a devastating oil spill. Using decoys and sound recordings, biologists lured them back and helped repopulate their spring and summer home at Devil’s Slide. 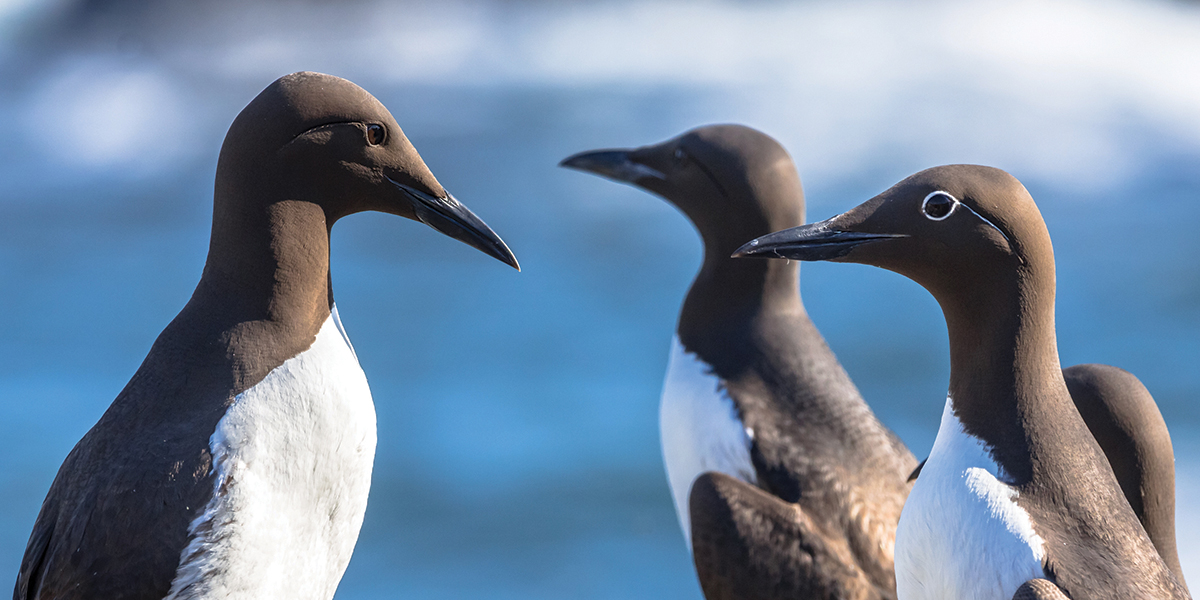 Today, visitors study the waters for plumes of migrating whales. Yet during World War II, offshore waters were scanned for enemy vessels. Devil’s Slide was the site of numerous Army observation stations, including one emplacement perched on a granite hill that is visible from the trail. Before the advent of radar, soldiers would employ triangulation, a technique of pinpointing enemy warcraft based on location reports from three observation posts. The abandoned bunkers are quiet reminders of an early coastal defense network that included ocean mines and underwater nets waiting to snare Japanese subs.

KNOW BEFORE YOU GO

Devil’s Slide Trail is open every day of the year, 24 hours a day. Dogs on leashes are welcome and pet waste disposal is available. There are two small parking lots at each end of the trail that are equipped with restrooms and drinking fountains. Lots open daily at 8:00 a.m. and close at various times depending upon the season. SamTrans operates a daily bus (#17) to the Devil’s Slide Trail and, on weekends, a dedicated shuttle picks up from Linda Mar Beach in Pacifica.

Trail ambassadors stroll the path making themselves available to answer questions and relay insightful stories. There’s also a series of interpretive panels that detail the natural and cultural history of the surrounding coast. Devil’s Slide experiences a variety of weather, sometimes within moments of each other, so remember to pack that fleece. 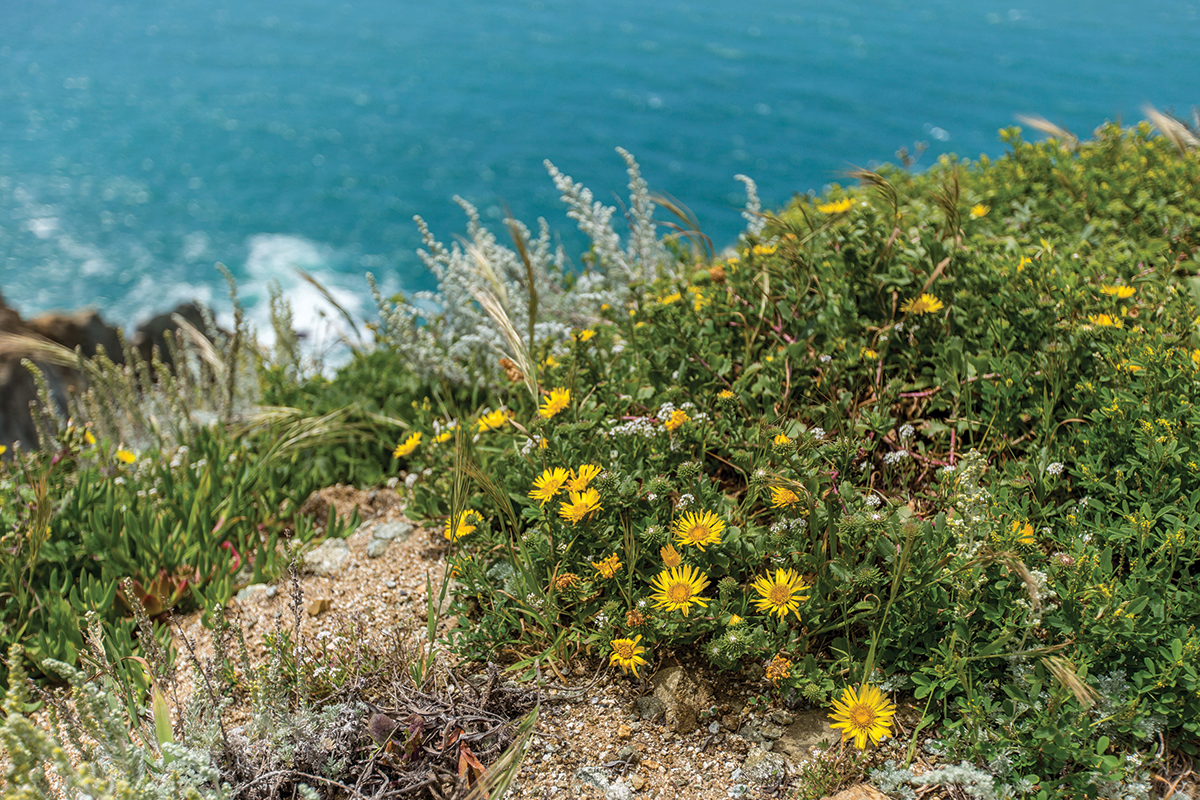 Craving a post-hike nibble? Less than three miles south, La Costanera dishes up contemporary Peruvian plates in a striking building set on sweeping Montara Beach. Nab a seat in the glass-enclosed dining room or heated, waterfront patio and enjoy creative cebiches and a Pisco Sour while watching the sun dip into the Pacific. 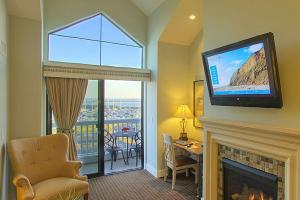