Skip to main content
Please note: This is an older article that was published over 4 years ago. It may contain outdated information, so please double-check any dates, hours, or other information before confirming your plans. Thank you!

With docks of colorful fishing boats and charming waterfront eateries, the cozy seaside hamlet of Pillar Point Harbor offers a taste of New England along the California coast. Ever present ocean views and salt-tinged breezes lure all those who share a love of the sea, from commercial fishermen to world-renowned surfers. Explore the coastal haven by foot and discover sandy beaches, scenic trails, and a killer seafood shack or two.

Surrounded by the ocean, wetlands, and dramatic coastal bluffs, Pillar Point Harbor abounds with natural splendor. For a scenic primer that’s easy on the calves, hit the Pillar Point Marsh trail. In just under a mile, it passes through a garden of coastal flora, alongside the harbor’s gently swaying boats, and out to the wild shores of the Pacific. Start at the namesake salt marsh whose symphony of squawks, chirps and honks comes from hundreds of birds that dart about its waters. Follow the trail as it skirts the harbor’s sandy shore, past a romantic old wooden pier, before arriving at the driftwood-strewn sands of Pillar Point Beach.

About a half mile offshore from Pillar Point Beach is the world-famous Mavericks surf break and some of the biggest waves on the planet. In the winter, waves can swell to over 60 feet high and break with a crash that registers on the Richter Scale. When conditions are right, twenty-four of the world’s best surfers are invited each year to scale Maverick’s mountains of water, literally putting their lives on the line, in a one-day surf contest. The event draws a crowd but the threat of rogue waves limits spectators to watch via big screens at designated viewing tents and local restaurants.

Want to hop on a board without risking life and limb? Check out Maverick’s Paddleboard, a great resource for the stand-up water sport. It’s co-owned by local surf legend Jeff Clark — along with his wife Cassandra — who is credited with being the first to surf Mavericks and founded its first surf competition. Clark fell in love with paddleboarding as a way to be on the water when there were no waves to surf. Thanks to three breakwaters, Pillar Point is one of most protected and safest harbors in the nation. The shop offers classes for newbies and rentals for pros. Lucky paddlers might spot bat rays and harmless leopard sharks scurrying underfoot. 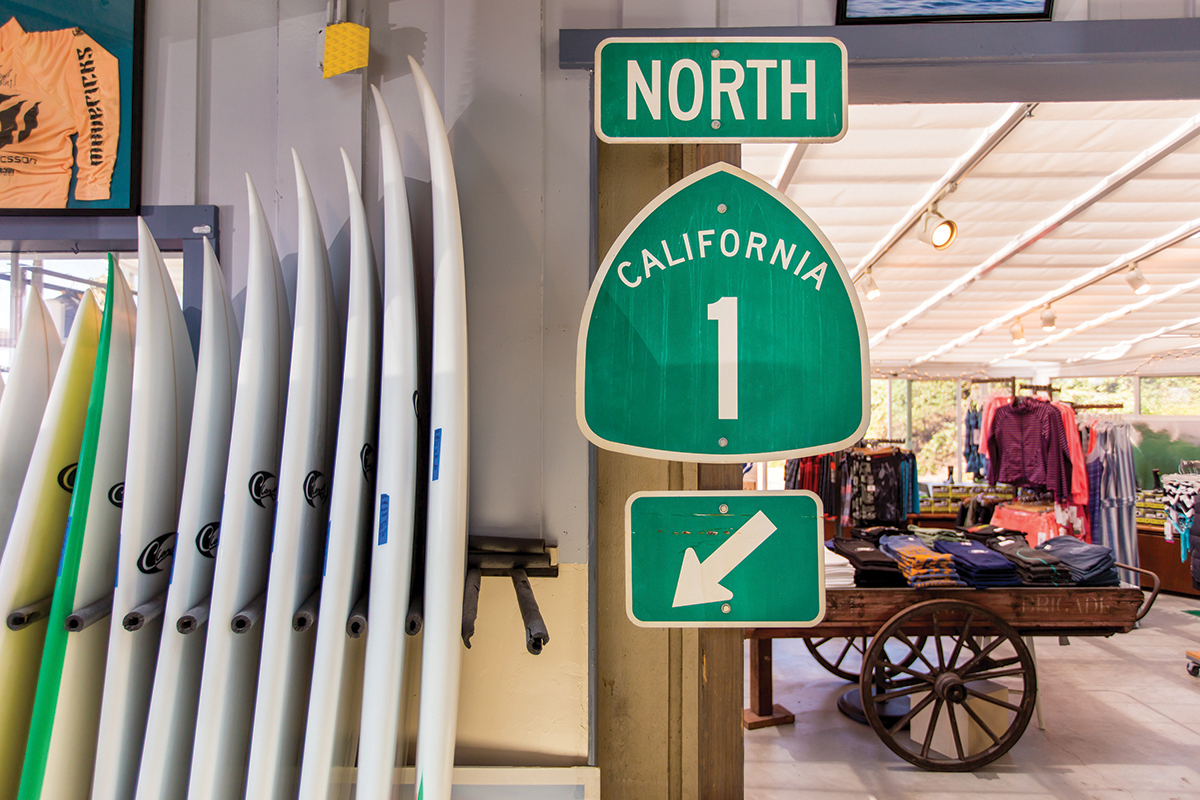 Another way to experience the harbor’s tranquil, wildlife-filled waters is via kayak. Half Moon Bay Kayak Co. has everything visitors need to glide peacefully across the harbor’s gentle waters amidst seabirds and harbor seals. For landlubbers, there are rental bikes to cruise the scenic Half Moon Bay Coastside Trail which hugs the shore along a paved route removed from traffic.

Whether you’re in town to ride a giant wave or simply grab a Mavericks hoodie, you’ll appreciate a stop at Maverick’s Surf Shop. Traveling surfers and curious visitors can pop into the shop and learn what it takes to surf Mavericks. The de facto headquarters for local surf culture has everything from posters to big wave boards custom made by Jeff Clark. “I’ve been fortunate to grow up next to the Everest of surfing and carve out an existence doing what I love,” says Clark.

The same could be said of Simmin and Sudi, two sisters who own the home boutique Nasturtium Art of Living. Tucked in a cozy seaside bungalow, the shop reflects their love of design and their coastsidehome with a curated mix of coastal-inspired home and garden decor. Say hi to Coco Chanel, their shaggy pup who’s usually seen lounging in the front garden welcoming visitors. 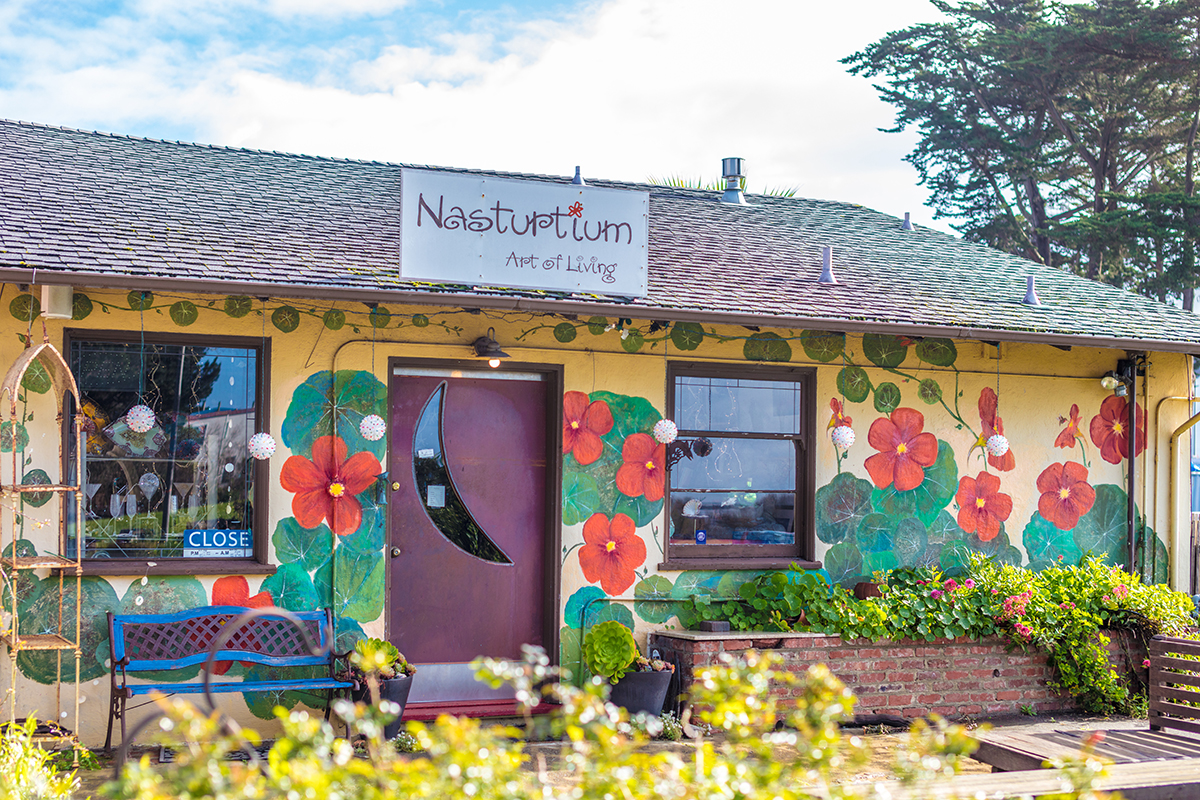 Arguably the most fun to be had at Pillar Point Harbor is scoring just-caught seafood directly from the fishing boats. Pillar Point is one of California’s last working fishing harbors and, each morning, Johnson Pier is a bustle of activity as returning boats are greeted with lines of eager customers. King salmon, halibut, petrale sole, and even live sea urchin are examples of typical seasonal catches. From November through May, Dungeness crab draws a crowd. Learn the catch of the day long before reaching the harbor by calling the harbormaster’s fishline (650-726-8724) or scrolling daily reports using the handy Fishline app (available at fishlineapp.com). Even if you’re not prepared to plop crabs into steaming stovetop pots, it’s fun to stroll the docks and watch fishermen pluck wriggling, purple-hued crabs from their watery tanks.

Don’t miss the interpretive signage that lines the pier and details the offshore marine sanctuary—one of the richest, most diverse ocean wildernesses in the world—and the harbor’s sustainable fishing practices. For example, fishermen only net male crabs of a certain size to ensure the population can reproduce and thrive.

Not everyone is keen to fillet a fifty- pound salmon themselves. Thankfully, Pillar Point Harbor brims with delightful eateries that dish up local seafood and inspiring waterfront views. Follow the crowds to Sam’s Chowder House, a spirited seafood restaurant with a setting close enough to the water to cast your own line. Nab a seat on the heated patio and tuck into a steaming bowl of clam chowder. Follow it with a lobster roll that would make a New Englander weep with heaps of plump lobster meat stuffed into a buttery brioche bun. 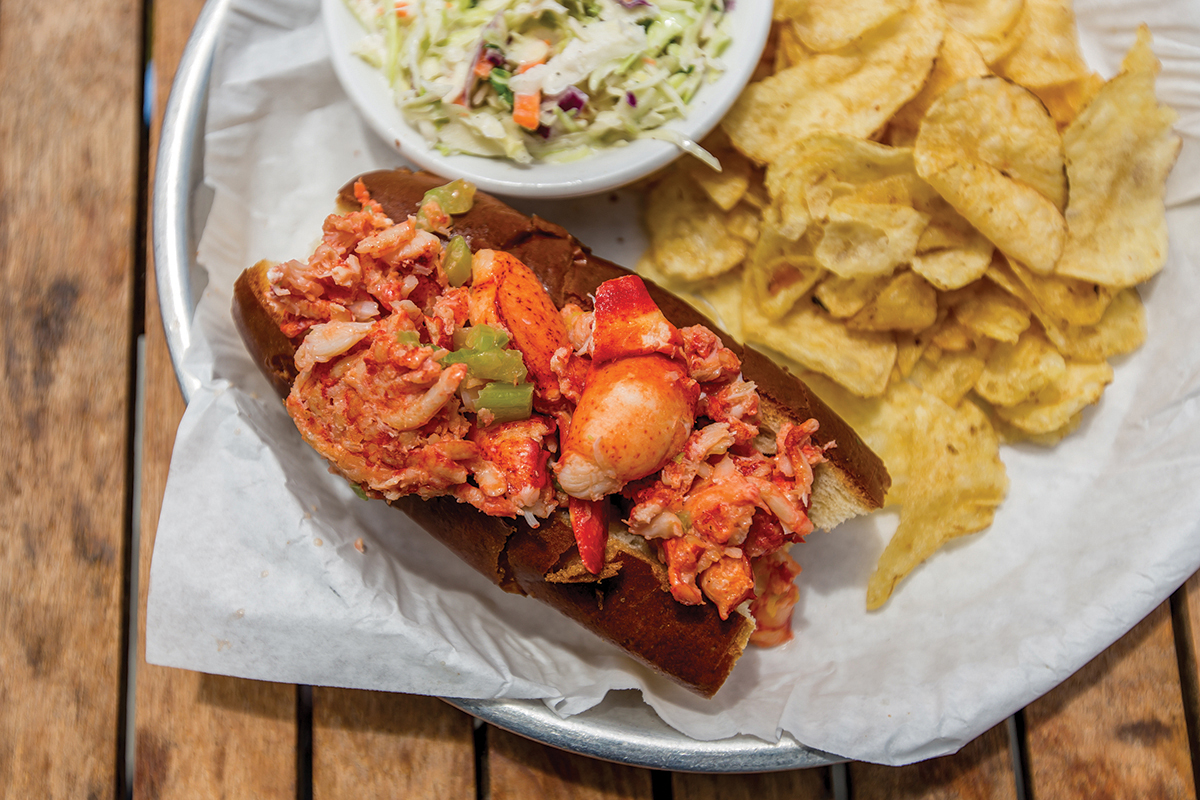 Over at Princeton Seafood Company, it’s all about casual seafood faves like baskets of fish & chips and bowls of creamy clam chowder. Sit down for table service or grab an order from the window counter and take it to colorful, sidewalk picnic tables. There’s also a fish market with impressive displays of the day’s fresh catch.

Comforts abound at Flavor, a dual-level restaurant with picture windows overlooking the harbor. Upscale comfort foods such as braised short ribs and a seafood pot pie make it a regular hang for locals. The downstairs lounge is a happy hour nirvana with cushy oversized sofas, flat screen TVs, and a menu full of food and drink specials.

The sunny Southern Italian food at Mezzaluna has gained a loyal following thanks to pastas like the Linguini della Baia bursting with clams, calamari, and scallops. The warm, light-filled dining room is anchored by a large stone hearth and overlooks the windblown cypress trees that line the harbor.

A colorful Spanish flag hints at the wonderful atmosphere and food at Seville Tapas. The cafe and wine bar sports richly decorated interiors that transport guests to the southern coast of Spain. Outside, diners cozy up around courtyard fire pits and enjoy sizzling platters of Gambas al Ajillo, or garlic shrimp, paired with lusty Riojas and spanish beers on tap. 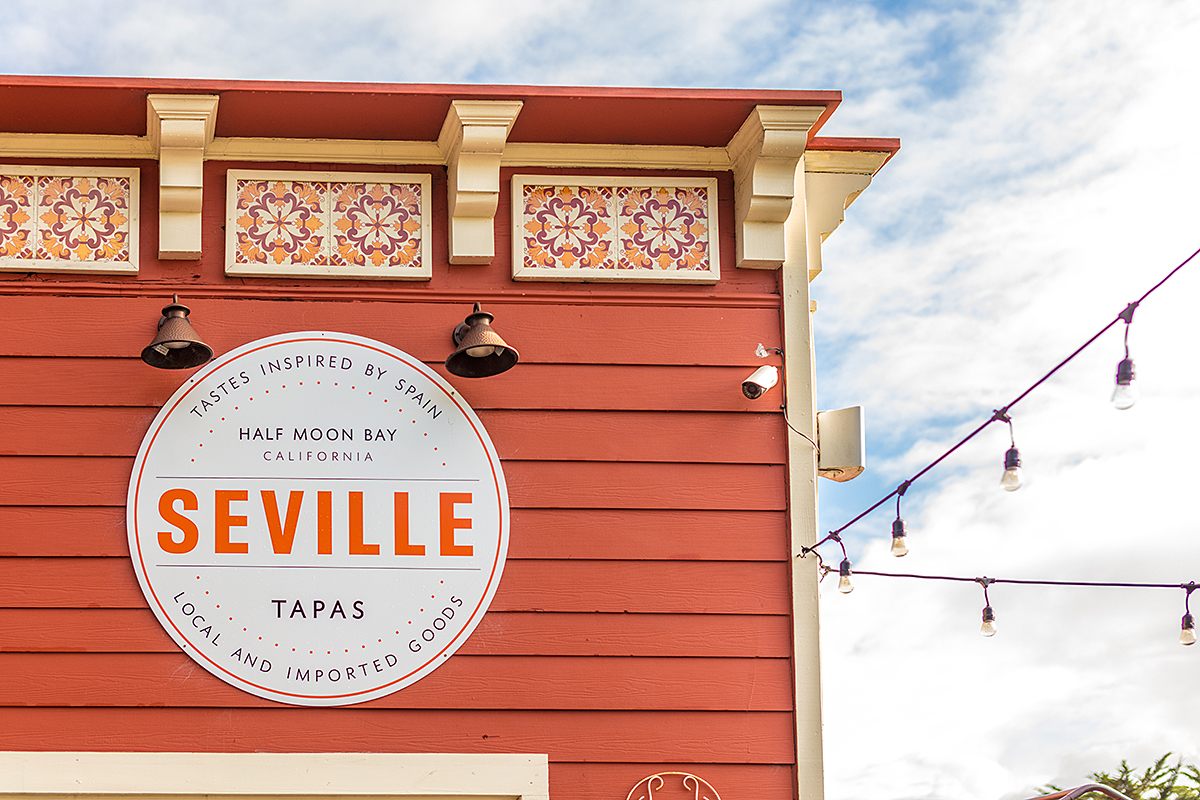 Before hitting the morning surf or trails, fuel up at The Press, a tidy barn-chic cafe that features pressed sandwiches on freshly-baked bread. Arrive early for your pick of unique, housemade pastries like a Strawberry Brie Danish. Or grab a breakfast burrito at Old Princeton Landing. During the last Mavericks competition, they sold sixty-five of them in less than an hour. Don’t be fooled by its casual exterior. The spic-and-span diner cranks out locally sourced produce and impeccable seafood that was likely swimming in the ocean earlier that day. At their adjacent tavern, locals clink pints of beer and swap stories from that day’s surf.

During Prohibition, Pillar Point teemed with rum runners and bootleggers who took advantage of its isolated waterfront setting. Ships would dump their illegal cargo into the sea and locals looking to make quick buck would snag the barrels and drive them up to San Francisco speakeasies. Today, the smugglers have been replaced by craft brewers, artisanal distillers, and small-batch vintners. 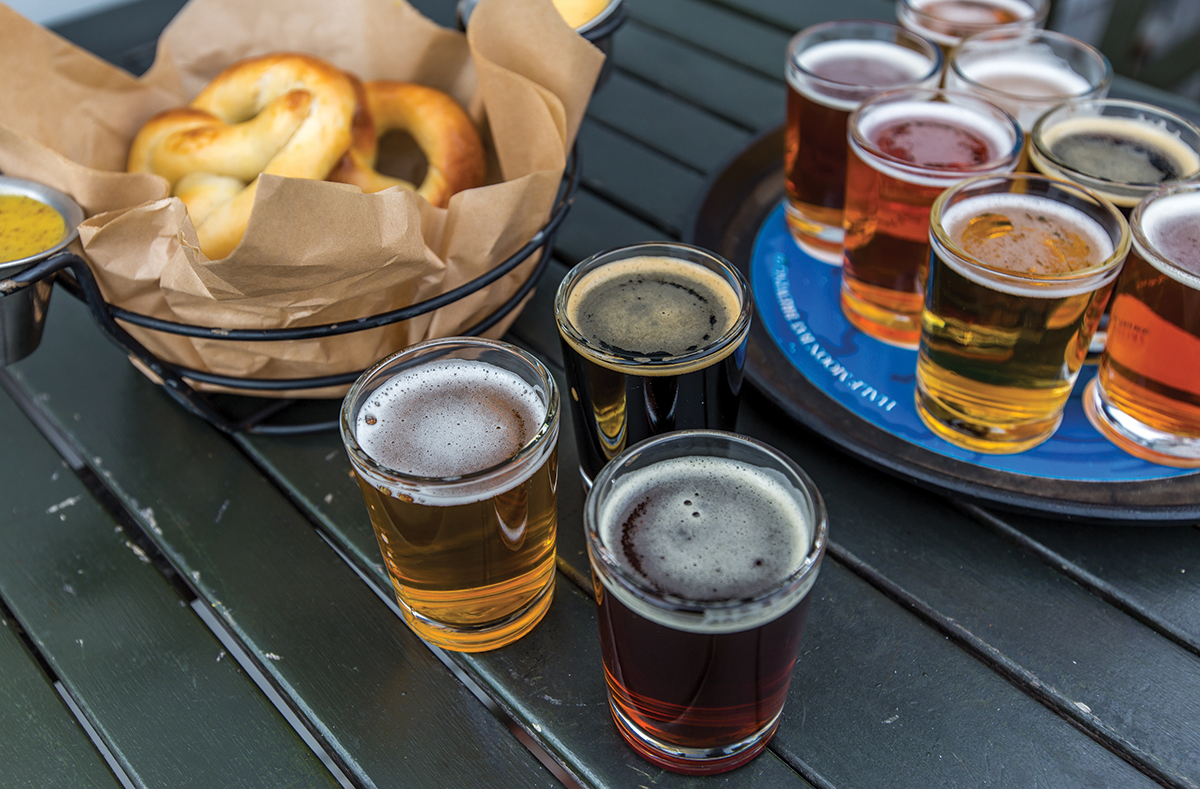 Just try and pass up a cold one on the large harbor-facing deck at Half Moon Bay Brewing. The pup-friendly gathering spot serves an amazing array of craft beers, from a clean-drinking German style Kölsch to the burly Tunnel Vision IPA. Order a sampler and pair it with beer-friendly bites like a jumbo pretzel or beer-battered fish & chips. Marking the entrance is a two-ton anchor salvaged from a sailing ship that broke apart on reefs off Pillar Point in 1876.

Half Moon Bay Distillery is the first legal distillery on the San Mateo Coast. Inspired by the brandies of her native Austria, owner Ulli and her husband Cesar imported a gleaming distiller from Germany and began crafting refined spirits unique to the central coast. Their Purissima Vodka is named for the historic ghost town of Purissima whose overgrown cemetery can still be explored if you can find it. Their velvety Harvard Avenue gin, rich with citrus and spice, will make an instant convert of anyone weary of the spirit’s traditional bite. Sample both while learning the art of distilling at their gorgeous new tasting room. 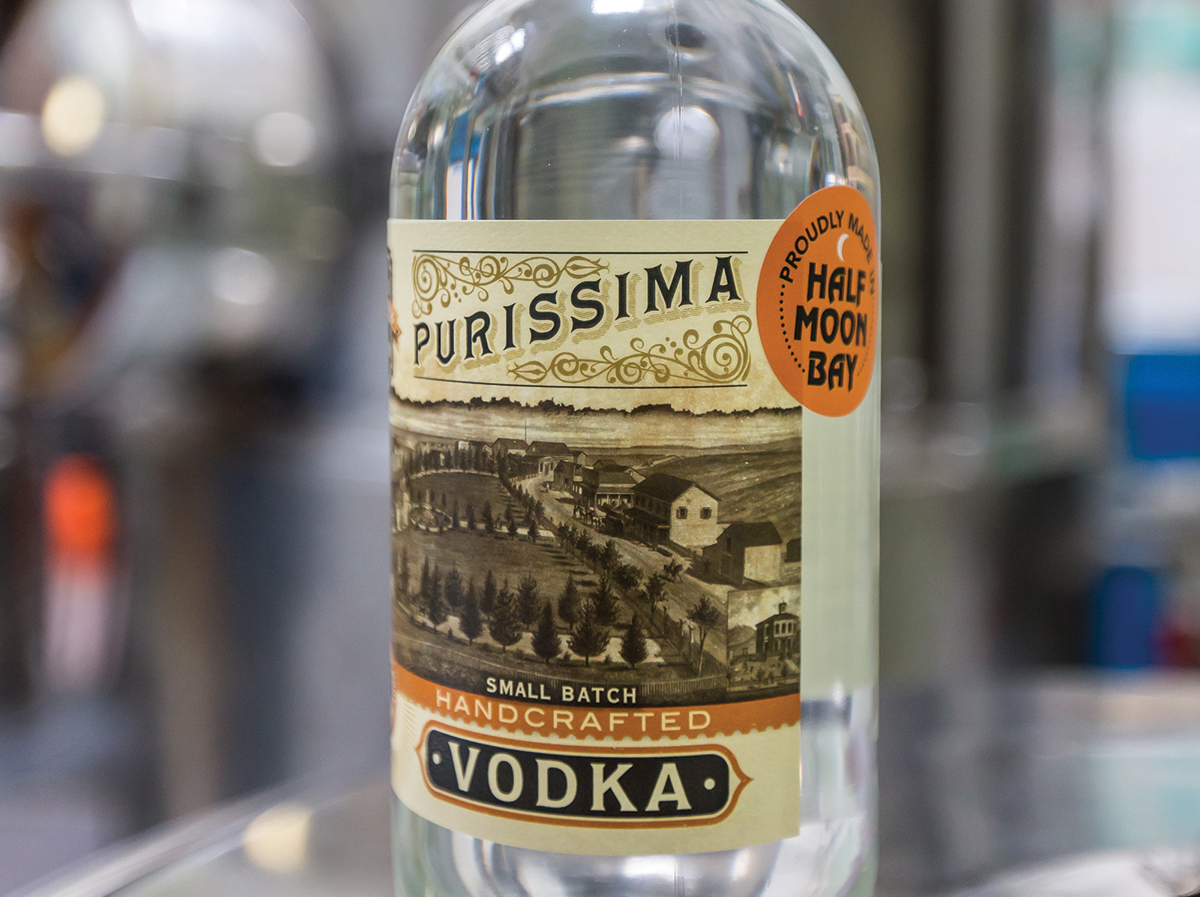 A few doors down, wine lovers can sip the elegant, food-friendly varietals of Trojak Knier Winery. Started by two locals who discovered a passion and talent for winemaking, the intimate winery sources grapes from Napa and Sonoma and crushes them amidst the crab nets and fish floats of Pillar Point’s shipyards. Everything is done by hand right down to the bottle labels. Drop by weekends and hope they haven’t sold the last of their delicious Pinot Noir.

Quiet sunrises and golden sunsets are strong motivators for staying the night. A number of cozy inns and beachfront hotels offer delightful ways for guests to extend their visit. Located smack dab in the middle of Pillar Point, Oceano Hotel & Spa is just steps from the harbor’s buzz of shops and eateries. Plush beds, fireplaces, and deep soaking tubs make it a cozy respite after an activity filled day. A 5,000 square-foot day spa doesn’t hurt either. A new reception center and ceremony garden make it an enviable wedding venue.

The Inn at Mavericks feels like a ship at sea with nothing but blue water visible from guest room windows. Hidden on a secluded side street, the boutique inn is perched directly on the harbor shore. Sit out on your oversized deck and enjoy the occasional visit from a raspy harbor seal. At night, be lulled to sleep by the gentle ripple of waves.

A stay at the Beach House Half Moon Bay is like enjoying your own weekend beach cottage. With plush living spaces and convenient kitchenettes, fully-equipped suites are situated on the sandy dunes that front a quiet corner of the harbor. End the day on a private balcony and watch the sun disappear behind a silhouette of Pillar Point. In the morning, wake to a giddy spread of fresh-baked pastries, fruit, and local organic coffee.

Tucked away on a quiet street across the harbor, Harbor View Inn is a comfortable property with spacious guest rooms that sport views of the Pacific. Fuel up with a complimentary breakfast before exploring the natural splendor and nautical charm of Pillar Point Harbor.

Although just 25 minutes from the jet-fueled din of SFO, Pillar Point Harbor feels worlds away. It’s a special destination along the California coast where visitors can enjoy a thriving seaside culture, engage with breathtaking natural surroundings, and reap the tasty rewards of a bustling fishing harbor.

It's Pumpkin Season in Half Moon Bay
Read more →