Skip to main content
Please note: This is an older article that was originally published over 3 years ago. It may contain outdated information, so please double-check any dates, hours, or other information before confirming your plans. Thank you!

Sam’s Chowder House sits steps from the shore with front row views of the Pacific—close enough to spy migrating whales leap from the water—and exceptional seafood that’s gained a loyal following and a shout-out on the Today Show. Yet, the family-owned and operated restaurant offers more than great views and grub. It provides an opportune way to experience the Coastside, from the local purveyors that fill its menu to its enviable setting that allows diners to bask in the region’s seaside splendor.

Hailing from the East Coast, co-owner Paul Shenkman and Sam’s executive chef/partner, Lewis Rossman, wanted to recreate the fish shacks of their youth—casual, friendly spots for clams, oysters, and a beer. Today, Sam’s welcomes everyone, from first dates to families, with a clean, rustic dining room that evokes a seaside New England eatery adorned with carved wooden signs proclaiming regional faves such as “Clams,” “Lobster Rolls,” and “Oysters.” Yet, the first thing you’re likely to notice is the knock-out view. Large picture windows wrap the interior, offering a dazzling ocean vista to every table, while an expansive waterfront patio has al fresco diners alternating between their forks and cameras. Strung with lights and dotted with blazing fire pits, the patio offers sweeping views of of one of the most magnificent settings on the coast, situated between the rolling waves of Surfer’s Beach and the colorful boats of Pillar Point Harbor.

Sam’s gets its seafood fresh each day. During crab season, it only has to travel a few feet from the adjacent harbor. Their seafood arrives via a delivery door and is immediately walked a few steps to a chilled, fish-cutting room where it is prepped for the day’s service. Classic dishes fill Sam’s extensive lunch and dinner menus—from fish & chips to a show-stopping spaghetti topped with a whole Maine lobster—but their signature dish might be the lobster roll, a New England staple that Sam’s helped popularize on the West Coast. It landed them national attention when it was voted one of the best sandwiches in America by the Today Show in 2007. Today, diners can get it in two styles—naked or dressed—each tucked into a buttery brioche bun and served alongside slaw and crisp, homemade potato chips. For a taste of their raw bar, try the Captain’s Platter which features a colorful sampling of vibrant poke, oysters, clams, and ceviche (scooped up with addicting house-made tortilla chips). For their daily fresh catches, Sam’s bucks formulaic sides in favor of composed plates with paired seasonal sides such as a crisp-skin Mediterranean Sea Bass with roasted broccoli and cauliflower, preserved lemon, and a zesty romesco sauce.

Part of what ensures the freshness of Sam’s food is their use of local, seasonal ingredients (don’t expect to see tomatoes outside of tomato season). Their list of restaurant partners reads like a who’s who of local farms. Order a salad and you’ll get a sampling of the region on a plate with hydroponic butter lettuce from Suncrest Farms, beets from Daylight Farms, and creamy bleu cheese dressing from nearby Point Reyes Creamery. Pair it with a cocktail made with Purissima Vodka from Half Moon Bay Distillery, a local producer of small-batch, handcrafted spirits.

In addition to supporting local farms and artisans, Sam’s is an active steward of healthy oceans. The restaurant follows the Monterey Bay Aquarium’s lauded Seafood Watch program, so you can rest assured that you’re eating healthy, sustainably-caught seafood. You’ll also notice there are no plastic straws at Sam’s. The restaurant recently nixed the synthetic sippers in favor of straws made from plants—not petroleum—and uses 100% biodegradable and compostable to-go containers. 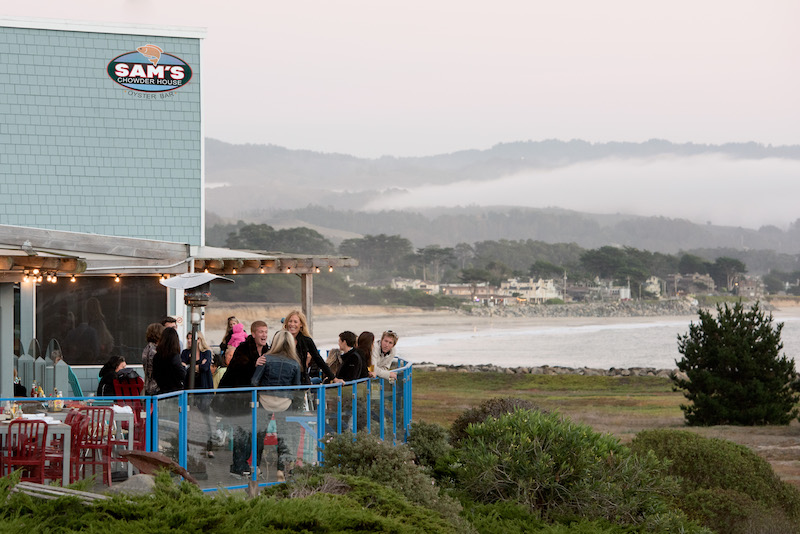 An Inspired Setting for Private Events

Looking for a spot to host your upcoming gathering? Sam’s is an inspired venue with private rooms, a dedicated deck, and a spectacular waterfront lawn. Plus, their Chowdermobile can bring the party direct to you. Want to dazzle your guests? Throw a lobster clambake, a fun East Coast tradition of burying a burlap-wrapped seafood feast on the beach. Sam’s swaps the sand for huge wooden New England steamers plunked in hot coals and brimming with whole Maine lobster, clams, mussels, red potatoes, corn-on-the-cob, spicy sausage, and the secret ingredient: seaweed flown in from Maine to lend a sweet, smoky flavor. While the meal cooks, guests mingle over drinks and bowls of Sam’s namesake clam chowder.

Make a Day of It

Sam’s primo setting allows guests to plan a day around their visit. After a meal, follow the short stairway which leads from the restaurant down to a lovely beach teeming with frolicking children and pups. Sam’s also fronts an especially scenic stretch of the paved California Coastal Trail. Stroll south to Surfer’s Beach where you’ll marvel at wetsuit-clad surfers carving waves and gliding into shore. Or head north to the calm waters and lively docks of Pillar Point Harbor where you can rent bikes to zip along the coast, or kayaks to cavort with harbor seals. Back at the restaurant, nab a s’mores kit and linger by the fire pits as the sun dips into the Pacific. With its magnificent setting and abundance of local purveyors, Sam’s offers a fun and easy way to experience the culturally rich and scenic Half Moon Bay Coastside.

Coastside Cuisine
Something for Everyone in Half Moon Bay
Read more →