With dazzling vistas and heaps of seaside charm, the Coastside’s historic lighthouses continue to beckon visitors to their scenic shores.

In the 19th century, the towering beacons ensured safe passage for the many seafaring vessels that braved California’s fog-shrouded shores following the Gold Rush. Today, the iconic structures shine a light on the region’s rich maritime heritage—packed with vivid tales of tragic shipwrecks—from some of the most breathtaking settings along the California coast.

During the Gold Rush, ships proliferated along the California coast delivering both gold seekers and goods to burgeoning San Francisco. Yet, little prepared 19th century mariners for the billowy mist that cloaked the shore, presenting a formidable navigational hazard. Add jagged offshore outcrops and swirling currents to the mix, and it’s little wonder so many vessels met their untimely demise along our shores. As a result, bellowing fog signals and beaming light stations began springing up in 1854, culminating in nearly 60 lighthouses lighting up California’s coastline.

Featuring breathtaking scenery, richly detailed exhibits, and enchanting seaside architecture, Pigeon Point Lighthouse is a must stop along the California coast. The solitary lighthouse tower stands amidst open fields, beckoning motorists from Highway 1. The 115-foot lighthouse is even more impressive when viewed up close. Constructed with over 500,000 locally produced bricks in 1872, the tower is the tallest—and one of the oldest—operating lighthouses on the West Coast.

You’re more likely to spot pelicans than pigeons at this remarkable promontory that was named for a doomed ship and not the feathered, city park denizen. In 1853, the Carrier Pigeon, a Boston clipper ship on its maiden voyage, drifted onto rocky, fog-shrouded outcrops and broke apart. The notoriously foggy promontory earned the nickname Carrier Pigeon Point, and before long, was shortened to Pigeon Point. As a reminder of the perilous waters swirling around the point, today’s visitors are greeted by a 5-ton piece of the hull from the Point Arena, a steam schooner that wrecked offshore in 1913. The ship was typical of the vessels that proliferated along the California coast in the late 1800s, fostering the development of small coastal towns by transporting local produce, hides, and timber to larger cities such as San Francisco.

Although the 145-year-old lighthouse tower is closed to the public while it awaits restoration, the adjacent fuel storage bunker and fog signal building offer intriguing displays including the lighthouse’s original 2,000-pound Fresnel lens. The beehive-shaped first-order lens—the most powerful lens of its time—refracts light from a flame or bulb through 984 prisms and 24 bulls-eye lenses to form a strong beam of light that can be seen from up to 24 miles away. Every lighthouse has a distinctive flash pattern which allowed mariners to chart their bearings. The radiant brass-encased lens was produced in Paris, the work of French engineer Augustin Fresnel (pronounced fra-NELL), and is one of few first-order lens still in existence.

The magnitude of the lens lends an idea of the hard work required of lightkeepers. Nicknamed “wickies” for the original lard-fueled wick lamps they maintained, 19th century lightkeepers toiled in often bitterly cold conditions performing rigorous tasks such as polishing lantern glass, repairing storm damage, and maintaining daily logs and journals. The maintenance at Pigeon Point lighthouse was so demanding that four lightkeepers—who lived on site with their families—were employed to fill alternating shifts.

While the lighthouse’s artifacts and displays serve as a fascinating time capsule from an earlier era, you needn’t be a history buff to delight in the station’s dramatically beautiful setting. Perched on tall coastal bluffs, the oceanfront environs immerse visitors in the rugged grandeur of the Northern California coast with panoramic vistas and fragrant sea air. Stroll garden-like grounds blanketed in hearty native plants dotted with yellow blooms, and gaze down at churning coves adorned with swaying sea palms. The windswept promontory features numerous scenic outlooks including a wooden viewing platform behind the fog signal building that juts out over rocky outcrops with front-row views of the Pacific and peeks of migrating gray and humpback whales in the distance.

Whaling played a major role in Pigeon Point’s history. From Mel’s Lane, a short but scenic blufftop boardwalk named for conservationist Melvin B. Lane, follow steps down to Whaler’s Cove, a peaceful, crescent-shaped beach that was once a bustling harbor for Portuguese whalers, timber ships, and clandestine rum rummers. Scan the rocky cliffs for the rusted eye bolts used to anchor schooners via thick metal cables, relics of the area’s bygone maritime commerce.

The Coastside’s lighthouses often draw comparisons to New England, but in the case of the Point Montara Lighthouse the comparison is especially apt. In 2008, a sleuthing researcher discovered that the cast-iron lighthouse—a rarity in California where lighthouses are usually made of brick and mortar—was the 1881 beacon that originally stood at Mayo’s Beach in Cape Cod, Massachusetts. It is currently the only known lighthouse to have stood watch on two coasts.

Point Montara was a significant waymark on the final approach to San Francisco, but it wasn’t until after a few high-profile shipwrecks that a fog signal was added in 1875 followed by a simple red lantern hung from a post in 1900. One such wreck was the New York, an iron-hulled sailing ship en route to San Francisco from Hong Kong. After averting near catastrophe on a previous voyage—thanks to the valiant Hannah Reed who took control after the ship’s captain was stricken by a paralyzing stroke—the luck of the ill-fated ship ran out in 1898 when it ran aground at what is now the foot of Kelly Avenue in Half Moon Bay.

Yet as local maritime author and historian JoAnn Semones notes, not everyone shed a tear for shipwrecks. “When word spread that a ship had smashed into shore, local townsfolk would come down and loot everything as souvenirs,” she says. Semones has written five books on local lighthouses, and lights up like her subjects when discussing their lesser-known stories. While researching her books, she met many local residents with artifacts from historic shipwrecks that have been handed down through generations including porcelain plates, silverware, and even a captain’s chair!

Are there shipwrecks still buried offshore? While most wrecks have been scavenged, carried away, or even burned, artifacts have occasionally washed ashore. In the 1970s, abalone divers discovered canons, bronze portals, and a hundred-pound bell from the Rydall Hall, a coal-hauling collier from Cardiff, Wales that smashed into rocks near Point Montara in 1876. The ship’s two-ton anchor can be seen today resting outside of Half Moon Bay Brewing Company, a fine place to cheer the Coastside’s maritime legacy.

Stay at a Lighthouse

Today, visitors can take shelter at some of the most remarkable—and affordable—lodgings along the California coast. Guests can stargaze at night, and wake to the sound of crashing waves from oceanfront rooms in the former lighthouse keeper’s house at Pigeon Point or the historic fog signal building at Point Montara. Each property offers the choice of bunking in shared quarters, or spreading out in private, family-friendly guest rooms. Operated by Hosteling International, the convivial accommodations offer a unique way to experience the Coastside’s captivating maritime history and natural splendor. 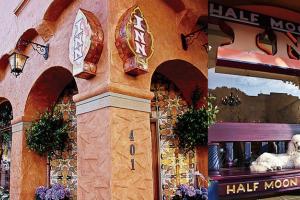 Half Moon Bay Inn
The Half Moon Bay Inn, built in 1932, underwent a recent renovation, maintaining its Spanish Revival architecture. Rooms are gorgeous and luxurious, with an old-world feel, designed with your comfort in mind. Read more→
Search Half Moon Bay Lodging

The Town Of Pescadero
Northern California Things To Do
Read more →