One of the most dramatic and scenic stretches of the Pacific Coast Highway, full of winding curves on the edge of the cliffs overlooking the shoreline, was once known for landslides, hence the name “Devil’s Slide.”

Today, Devil’s Slide is no longer so “devilish.” Instead it’s a serene and spectacular path for communing with nature, seeing wildlife, feeling the sea breezes, and enjoying the beauty of the coastline.

Devil’s Slide, completed in 1937, was particularly treacherous, due to road collapses and accidents. It was also the location of a military triangulation station and observation site used during World War II as part of the harbor and coastline defense of San Francisco. As early as 1940 the road had to be closed due to erosion and in 1995 the road was closed to traffic for almost 6 months. During that closure locals discovered what a stunning spot it was for enjoying nature. In 2013 Caltrans shut down the coastal road and opened up a tunnel for cars instead. Now the almost 1 1/2 mile trail is the only spot along the Pacific Coast Highway where you can walk with no cars.

Today the Devil’s Slide Trail is part of the San Mateo Parks system and is very accessible, with parking lots at both the north and south end. On the south side there are actually two parking lots. The parking is limited though, so getting there early especially on the weekend is important. There are bathrooms, a water fountain and garbage and recycling. The pathway is fairly wide and there are lanes for bikes and for those on foot. Equestrians are allowed, though the paved road may not be ideal for horses. The path is wide and not very steep, so it is great for all levels of fitness. Bring a windbreaker or jacket in case the wind picks up, a hat to protect you from the sun, comfortable walking shoes or hiking boots and binoculars, if you have them. You may also want to bring a camera to capture the stunning views.

It’s hard to imagine that the trail used to be a section of highway. It’s quiet and features gorgeous views of the ocean, with a backdrop of the cliffs and bluffs. Interpretive panels offer information about the history, geology and wildlife along the way. Birdwatchers take note: some of the birds you may see include pelicans, peregrine falcons, pigeon guillemots who nest in the cliffs, Brandt’s cormorants diving in the ocean and western gulls. Keep your eyes open for whales and seals too.

Depending upon the season, the landscape may be speckled with colorful wildflowers including California sagebrush, gum plants, blue blossom ceanothus and lizardtail, also known as seaside woolly sunflower.

A great spot to stop for a little beach time is Montara State Beach, just past the south end of the trail. Popular for beachcombers, surf fishers and tide pool exploring, the mile long beach has plenty of parking and restrooms. Dogs are allowed on leash.

Across from the beach is McNee Ranch; state park land within Montara State Beach which has several hiking trails and view trails. There are 3 trails rated “moderate”which range from a little over 3 miles to 7 miles and from 78 feet to 1,886 feet above sea level.

Just about 15 minutes down the road from Devil’s Slide is Moss Beach Distillery. A landmark spot set back from the road overlooking a beautiful beach cove, it is a relaxing place with a patio where you can soak in more ocean views and enjoy a prohibition era cocktail after your hike. In addition to a full bar, the menu features plenty of seafood including clam chowder, oysters on the half shell and fish and chips. Originally opened in 1927, famed mystery writer Dashiell Hammett not only spent time here, but used it as a setting for one of his short detective stories, “The Girl with the Silver Eyes.” Rumored to be haunted by a ghost, it is a truly haunting spot. 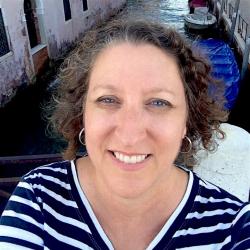 Amy Sherman is a local food and travel writer. She’s the author of Williams Sonoma New Flavors for Appetizers and Wine Passport Portugal and has written for food, travel and lifestyle publications including Afar, Food Network, Marin magazine, Fodor's and 7x7. After years of driving past Half Moon Bay on her way to and from UC Santa Cruz, she’s now happy to stop and fully enjoy its charms. 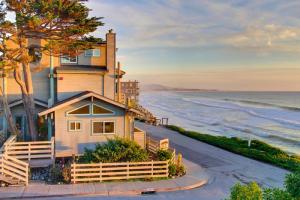 It's Pumpkin Season in Half Moon Bay
Read more →