The Coastside comfortably takes its place between the dramatic, green coastal mountain range to the east, and the powerful blue-green Pacific to the west. Because it is somewhat isolated from its major metropolitan neighbors, the area has not changed as much as it might have over the years. 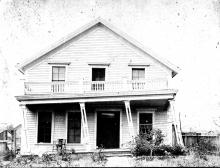 Dating back to the 1840s, the community that is today called Half Moon Bay is the oldest community in San Mateo County. Cabrillo Highway (California Rt. 1) along the coast, and San Mateo Road (Highway 92) over the mountains follow closely the earliest trails of the original Costanoan Indians, who lived here for thousands of years. The Coastside was the first place on the peninsula visited by Spanish military explorer Gaspar de Portola, with his accompanying missionary, Father Juan Crespi in 1769.

The earliest settlers of the Coastside were the recipients of Mexican land grants—handed out to prominent and worthy military and civil leaders by the government. Five of those land grants make up what is referred to as the Coastside today. As the early commercial developments were primarily established by Mexican pioneers, and others from Spanish-speaking cultures, the village was dubbed “Spanishtown” by its Anglo visitors and settlers. The place was eventually renamed “Half Moon Bay,” which was the name earlier given to the beautiful, crescent shaped harbor near today’s El Granada.

In the later 1800’s and on into the 1900’s, the area’s character was altered by the arrival of the Americans, Italians, Portuguese, Pacific Islanders, Chinese, and a host of cultures. Half Moon Bay became a thriving community. Traces of that past remain very visible in the many historic buildings on downtown’s Main, Purissima, Johnston Streets, and others (See “The Treasures of Half Moon Bay,” A small souvenir guide book found in many stores and shops around town).

Stage coaches ran their routes from San Mateo to Half Moon Bay, and then on south to the little towns of Purissima, Lobitos, San Gregorio and Pescadero. North of town were the wharves near Miramar (known then as Amesport Landing) and at Pillar Point—for ocean shipping back and forth from San Francisco.

The 20th century brought more great changes—especially the construction of the Ocean Shore Railroad. From 1907 through 1920 the railroad hugged the shoreline from San Francisco to Tunitas Glen—just south of town. Passengers marveled at the stretches of sandy beaches, perfect for picnics, horseback riding and exploring. The towns of Montara, Moss Beach, El Granada and other neighborhoods were laid out by developers anticipating the great influx of San Franciscans. Due to financial problems, the advent of the horseless carriage, and less than expected markets, the railroad failed. Although growth was slowed, the railroad did leave the subdivisions that were the seeds of modern suburban growth.

The Coastside was certainly a lively place during Prohibition. Its hidden ocean coves, thick fog for cover, and isolated canyons, the setting was ideal for smuggling alcohol from Canada, and very local moonshiners. Speakeasies and profitable traffic were hallmarks of the Coastside for those years.

From the 1920s to the present, growth has been slow and steady. Present day visitors of the Coastside will see original farms dating back to the 1800s. There are miles of unchanged, white and sandy beaches, redwood forests, beautiful state parks, and fields of wild and cultivated flowers—hiking and biking trails along ocean bluffs and among the mountains continue to make the coastside a joy for modern day explorers.

Special thanks to The Half Moon Bay History Association  /  HalfMoonBayHistory.org

The Mission of the HMBHA is to Educate, Celebrate and Preserve the History of the Coastside. We answer local history questions.

Most photography in this section provided by The Half Moon Bay History Association. 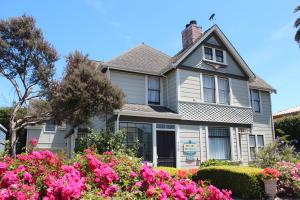 Nantucket Whale Inn
Feel the stress disappear as you indulge in relaxed luxury at this boutique inn. After extensive renovation, the chic décor reflects the feel of an elegant Nantucket Island home – opulent and tasteful, comfortable and cozy. Read more→
Search Half Moon Bay Lodging